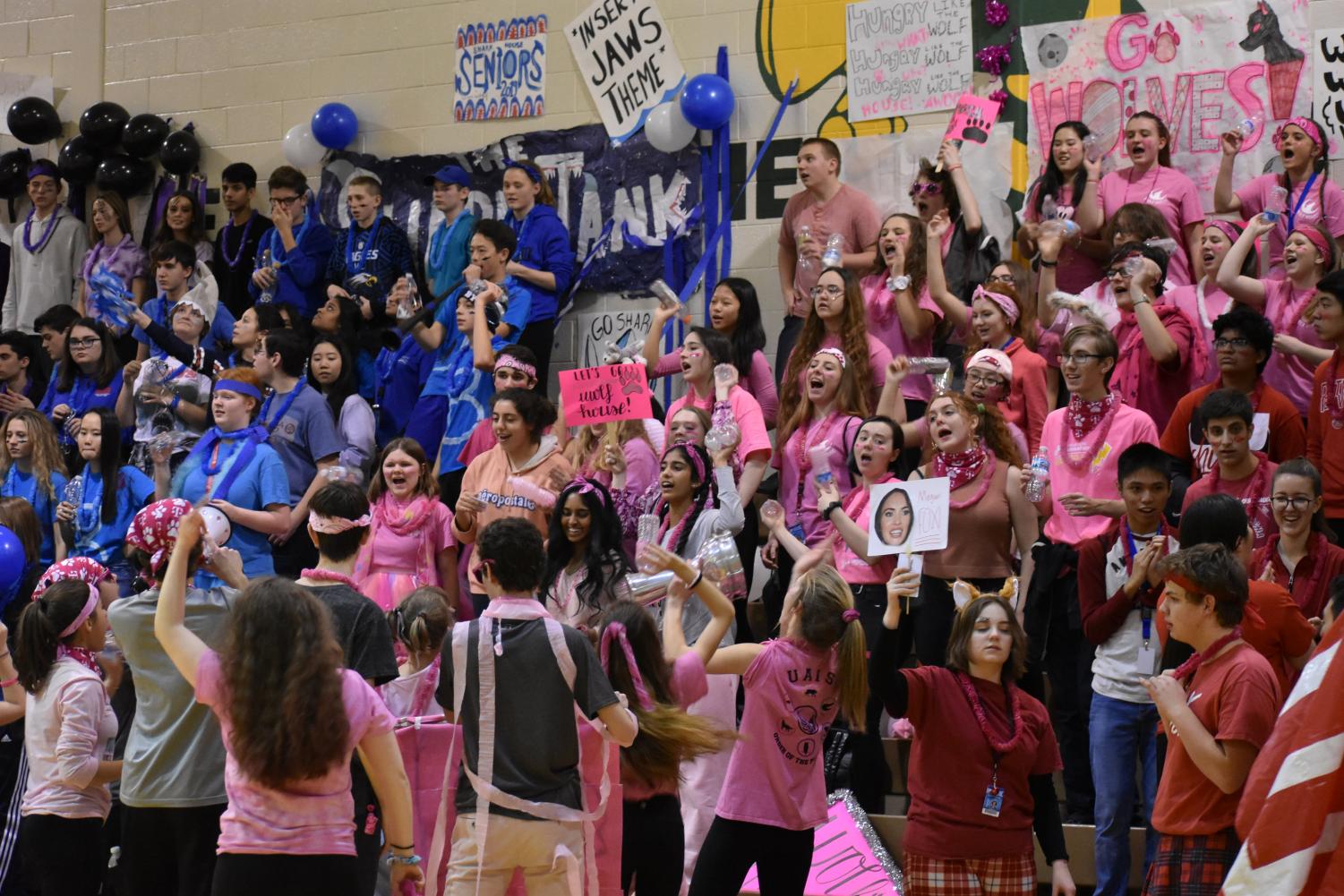 Shark and Wolf students cheer for their houses during December’s Olympics. (Yeokum)

Shark and Wolf students cheer for their houses during December’s Olympics.

The Evolution of Olympics

During December and May of every year, the Utica Academy for International Studies students put down their books and paint their faces for Olympics, an event with all students and grade levels divided into six houses for friendly competition and spirit.

Many freshmen had an amazing time during their first Olympics. “It was really fun,” laughs Tiger House freshman Christina Karadsheh. “The enthusiasm at the houses, at the individual rooms, we were all shouting and getting ready and it was really fun.” Tiger house won second place in this year’s Olympics.

Even though UAIS has held 20 Olympics over 9 years, not many students know of its origins. This can make one wonder: Did the freshman of 2009 have the same experience as the current freshman class?

The first Olympics contained 106 students in the freshman class and it was created with a purpose to bond all the students together. Because the overall student popoualtion increased with each new school year adding a new grade level, changes had to be made such as the addition of a fundraiser, new games, and the new houses.

At the time only five houses named after famous people were used: Khan, Einstein, Ghandi, Hypatia, and Shakespeare. The staff decided to use houses instead of single grade based teams because of its international touch, its multi-grade level bonding potential, and the relation to everyone’s favorite wizard Harry Potter.

“We saw [comradery] for the first time during the sorting ceremony. There are some students in this school that don’t play on teams, they weren’t part of clubs in their home schools so maybe they had never gotten that high five or maybe had someone rely on them and we liked the Olympics because everybody participates,” explains Mr. Layson.

The Olympics have morphed over the years. It has grown from 106 students to approximately 400 cheering for one of six animal houses: Crocagator, Shark, Fox, Tiger, Owl, and Wolf. Olympics also includes a student-run fundraiser that counts for points during the games.

The staff of UAIS and the students of Student Advisory Board (SAB) work for weeks putting together this event. According to Mr. Layson, each SAB member puts roughly 30-40 hours in preparation for Olympics.

SAB handles a range of jobs for Olympics that many students don’t even think about. Senior SAB member Lauren Pietryga commented on the different jobs saying, “We create house power points, spreadsheets with participants for each event, surveys for event participation, draft rules and supply lists, schedule supervisor meetings with teachers, attend and plan after school run-throughs for events, set up events before/after school, create brackets for scoring, make kahoots for lunch, and now House Ambassadors organize spirit. The list could probably go on.”

In order to keep the first class magic of Olympics, incoming freshmen are kept in the dark about the full experience of Olympics. Very little details are given and no videos are shown. Mr. Layson explains, “We want them to sort of have that experience of ‘What is this kind of thing?’”

Before the Olympics, Christina and Patrick were excited as they smiled and laughed discussing what it might be like. “I’m expecting a very fun and competitive environment and we can all bond with our cohort and our house. It will be fun,” says Patrick. “I’m expecting a lot of people to be excited and energized and just really enthusiastic about everything and being really competitive and a lot of yelling and screaming,” predicted Christina.

After the games, Patrick describes his experience, “I really didn’t think it would be a lot of senior versus freshmen, I thought it would be more balanced out.” He saw the advantages seniors can have in the quidditch event and the strategies that they could use in order to take advantage over lesser exerienced competitors.

However this doesn’t mean that the seniors are able to destroy the spirit of the other competitors. Patrick added, “…it was really fun competing against everyone and showing [the seniors] that we still have heart and we still are going to fight against them even though it is going to be a tough battle.”

This year Shark House won with Tiger House in a close second.

The freshmen continue to look forward to the upcoming years of Olympics. “The pep was different than what I expected in the gym,” Christina laughs. “Everybody was dancing and shouting and chanting. Like, I didn’t think that was going to happen.”

But as the freshmen look forward, the seniors are looking back at their years of Olympics. Lauren reflects back and feels “to an extent, relieved. After organizing five Olympics, it becomes a little cumbersome, but I genuinely think each Olympics is more rewarding than the last.”

However, Paul Hanna doesn’t feel as nostalgic. “Honestly,” Paul laughs looking down at his croc suit that he bought freshman year, “I never really looked forward to Olympics too much. It was just a thing that happens so I don’t really mind either way. Maybe it will hit me at spring Olympics and then I’ll be like ‘Oh man.’”

Olympics has changed a lot over the years with the addition of fundraisers, spirit sticks, animal houses, and lots of animal suits. The event brings students together to bond through competition. Olympics is where UAIS introduces the freshmen and say their farewells to the senior class with the unique experience unlike any pep rally.

If you have any suggestions for future Olympics, contact the Student Advisory Board!