The Case For Arming Teachers

At this moment, the nation is searching for a solution to a pressing problem. Our schools are under attack, and we all wish to protect them. However, there is considerable disagreement as to the best solution. I believe that an excellent start would be to begin arming our teachers, because gun-free zones are inherently dangerous, teachers can provide a successful line of defense against future school shooters, and teacher intervention can be preferable to armed guards or even police.

If simply keeping weapons out of various areas made them safer, then arming teachers would be a foolish choice. However, this is not the case. Most schools today are gun-free zones, where only police officers are allowed to carry firearms. The problem arises when monsters like Nikolas Cruz refuse to obey the law. Current restrictions empower these lawbreakers, as shown by the Crime Prevention Research Center (CPRC). The CPRC reports that from 2009 to 2014, 92% of public mass shootings occurred in “gun-free zones” (see figure 4a, below). This is not a coincidence; many mass shooters do take the security of their target into consideration. Additionally, the CPRC reports that many have written about avoiding targets protected by armed personnel. As Elliot Rodger, a mass shooter, put it, “It would be impossible to kill enough of my enemies before being dispatched…” Additionally, the Aurora, Colorado shooter went to the only theater near his apartment where guns were banned. Given that “Gun-Free Zone” signs attract society’s most dangerous members, we should remove them from our schools. The deterrent effect could be further compounded by making the teachers conceal their weapons. This would prevent attackers from knowing which classrooms were protected, as well as guard against any student attempting to steal a weapon. 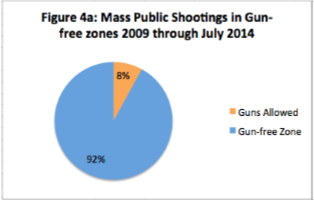 Putting a few carefully managed guns into schools won’t just deter potential mass shooters. It also provides a way to handle those individuals who attack schools anyway. The FBI reports that 3.1% of mass shootings were stopped by armed civilians from 2000 to 2013. Given that only 8% of shootings occurred outside gun-free zones, 38.8% of mass shootings were stopped after intervention by the “good guy with a gun” when such intervention was possible. In fact, some shootings have already been stopped by armed faculty. The Huffington Post reports that in 1997 a shooter at Pearl High School was stopped by the assistant principal, who was armed. The Crime Prevention Research Center reports similar situations at a school in Edinboro, Pa., as well as the Appalachian Law School in Virginia, among others. Some of the most vocal opponents to this plan are concerned about teachers themselves firing upon students. However, this ignores the lack of such incidents in the schools who have resource officers and armed teachers. I could not find a single instance of an armed teacher opening fire upon an innocent student. As far as I can tell, these concerns, while well-intentioned, are unfounded.

I’d also like to review a few reasons teachers would be preferable to armed guards or even police. Teachers are permanently stationed at schools, allowing an instant response to active shooter situations. On the other hand, the Wall Street Journal reports that it takes police 11 minutes on average to respond to calls. These minutes are crucial; Nikolas Cruz, for example, opened fire for only 5 minutes. This is also important to consider when concerns about police correctly distinguishing between teachers and shooters- the event will likely be over by the time police arrive anyway.  Additionally, for schools it is much cheaper to train existing faculty than to hire extra guards or school resource officers. The Clarksdale School District in Arkansas was able to train 13 staff members for a cost of a little over $5,000 each, while a single guard would have cost $50,000 annually. Finally, armed guards don’t have to engage the shooter, as demonstrated by Deputy Scot Peterson, who stood outside Marjory Stoneman Douglas High School while the shooting took place. Teachers don’t have that choice; if they are attacked they have to respond. Currently, we tell them to run or hide. I want to give them a better last resort: fight back.

As we band together to protect our schools, we owe it to one another to examine potential solutions with a critical eye. Our schools can no longer afford to be gun-free. Instead, we should arm our teachers as a critical line of defense against the monsters among us. We cannot stop all school shootings before they happen. We can, however, give America’s teachers a chance to protect themselves and the children under their care.

The Case Against Arming Teachers

In the United States, gun control has been a topic of heated debate for quite some time, and after recent school shootings, possible solutions have been proposed across both political aisles to solve the problem of school shootings.

However, once you go beyond the statement I just made, controversy will undoubtedly ensue. Unfortunately, citizens from both the Left and the Right have made egregious moral claims about people that they barely know. Thus, I would like to begin my argument by clarifying my stance while simultaneously acknowledging that people are not bad people simply because they disagree with you. 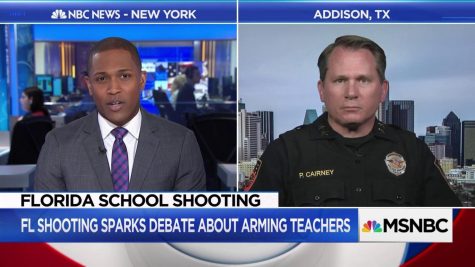 That being said, you might be slightly surprised to learn that I am conservative based on my position. Nonetheless, I find it abhorrent to degrade my political opponents by suggesting that they are soulless human beings with no moral compass. In my view, there is an extremely small minority of people that have legitimately terrible motives, whereas the vast majority of Americans on both sides of the political spectrum are good, moral people with differing perspectives.

With that out of the way, let’s begin my argument against the arming of teachers in public schools.

Simply stating, “Arm teachers!” isn’t a viable solution to me. When considering a parent’s perspective, it quickly becomes clear that there is not enough time spent between teachers and parents to get a true understanding of each other’s character and values. In essence, parents and teachers don’t have a close enough relationship to extend the duties of a teacher to the protection of their child with a firearm. 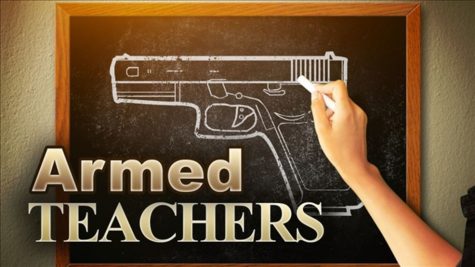 Granted, one might argue, “What about the police? We trust them every day to protect us, and we probably don’t know them personally.” However, when you consider that a teacher’s primary function is to educate, whereas a police officer’s primary function is to protect and serve, it quickly becomes clear that we have to trust the police to some extent, especially since they’ve built a career around protecting citizens of the United States.

Thus, I don’t believe that most parents would be comfortable with a change as impactful as arming teachers would be. While I’m certainly not claiming that this would lead to a school environment that borders on unethical or immoral, I am saying that a teacher’s job should be to learn how to properly teach and educate our children. They have a designated role in society, same with police officers. This leads me to my next point.

Since teachers have been designated with the role of educating our youth, hiring school resource officers (SRO) to protect all public schools across the country would be a more effective solution to the problem that we are currently facing in the United States. With SROs employed throughout the country, schools would be able to respond to everything from fights (which are normally broken up by teachers) to shootings in a matter of seconds, rather than minutes.

As we’ve already seen in Great Mills, Maryland, SROs are able to effectively halt a school shooter. Implementing more SROs would undoubtedly increase the security at schools, aiding in the prevention of school shootings due to the intimidation factor of having an officer always on duty, along with the ability of schools to respond to a shooter in seconds.

While Roger Sollenberger, a columnist at Paste, suggests throughout the first section of his article that the enormous cost of hiring and training SROs wouldn’t be worth it, I would gladly disagree.

According to an extensive and detailed study done by Dr. Linda Duxbury and Dr. Craig Bennell at Carleton University in January of this year there are several benefits to hiring and training SROs. These benefits are listed below:

In addition, the study also found that for every dollar invested in the program, a minimum of $11.13 of social and economic value was created. Thus, Mr. Sollenberger seems to only focus on the immediate cost, and lacks a big-picture view of issue.

If you’re interested in discussing this issue with me, please feel free to either Email me at [email protected], or find me during school if you’re a student. I welcome a good-spirited debate!